'Ghosts' Is An Eerie, Edgy Tale Of Perception And Possession 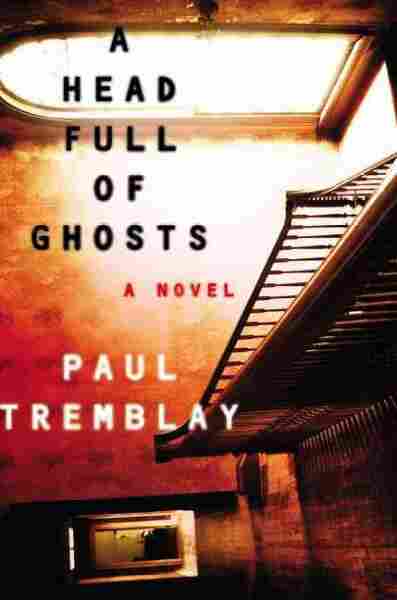 How? Amazon Independent Booksellers From H.P. Lovecraft to Stephen King, horror writers have found frightening inspiration in small-town New England. It's no surprise, then, that the works of both authors are cited in A Head Full of Ghosts, the latest novel by Boston-based writer Paul Tremblay. Accordingly, A Head Full of Ghosts is also set in New England — in Beverly, Mass., just across the Danvers River from Salem. In spite of that proximity to so much chilling history, the book is not your typical tale of the supernatural. Instead, it smartly, viscerally exposes the way mass media, the Internet and pop culture have transformed our experience of that primal human impulse, horror.

On its surface, A Head Full of Ghosts is easy to grasp: A 23-year-old woman named Merry Barrett is working with an author, Rachel Neville, on a book about Merry's troubled childhood — specifically a time 15 years earlier, when Merry's older sister, Marjorie, was behaving so hideously that it led their unemployed, religious father to blame demonic possession. Their skeptical mother disagreed, and the fractures that appeared in the family were ripped open when they agreed to let a TV network turn their ongoing crisis into a reality show called The Possession.

The show lasted just six episodes, thanks to an explosive incident involving a Catholic exorcism; since then, Merry has tried to cope with the unimaginable tragedy that followed. As she reveals her past in fragments to Rachel, stirring up the long suppressed dregs of her memory, a horror blogger named Karen Brissette begins dissecting The Possession, episode by episode, in an attempt to decipher what really happened that gruesome night 15 years ago.

If A Head Full of Ghosts stuck to this relatively straightforward plot, it would make for a sturdy, solid thriller. But it doesn't stop there. Tremblay ambitiously structures the story as a pingponging narrative that coalesces into an unsettling conversation about the truth, or what the various characters suspect is the truth. It's an intricate dance, and one that Tremblay pulls off with agility, ease and immaculate pacing. Merry's poignant numbness, Karen's secret reason for being obsessed with The Possession and Marjorie's increasingly shocking transgressions mesh like clockwork with themes of greed, deception and faith.

And it raises many provocative questions: How many selves do people have, and how has reality TV and social media affected that? How do stories metamorphose every time they're told, and why is that more true now, in the age of digital information, than ever? And why do archetypes still hold so much power over our psyches, even in this cynical, tech-savvy era?

In essence, A Head Full of Ghosts is a book about a book about a TV show about a real-life event whose facts have never been fully established, with running meta-commentary by a blog that bears its own secret agenda. On top of that, it's told by an eyewitness whose reliability is just as problematic. And the blog entries themselves? They're virtuoso pieces of pop-culture critique that simultaneously exemplify and spoof the entire idea of pop-culture critique. Tremblay not only keeps this tangle straight, he renders it progressively gripping and suspenseful — and his ultimate, bloodcurdling revelation is as sickeningly satisfying as it is masterful.