'It will kill me' – behind the devastating Avicii documentary

But his film offers a startling number of clues. Avicii: True Stories, which will debut on Netflix in the US, UK and Australia on 28 December, presents an unflinching portrait of an artist coming apart. With fly-on-the-wall proximity, the camera shows Avicii repeatedly, and emphatically, telling everyone around him how exhausted, anxious and sick he is. “There was never an end to the shows, even when I hit a wall,” the DJ says early in the film. “My life is all about stress.”

...ho-struggled-with-the-spotlight"> “He’s a shell of what he used to be,” says a friend in the film, while another describes him as “a ticking timebomb”.

It all builds to the point where, late in the documentary, Avicii flatly says of touring: “It will kill me.”

Eventually, he did do something about it. At the end of 2016, Avicii fired his manager and retired from the road. The film positions that decision as its happy ending. It culminates with scenes of a tanned Avicii on a tranquil beach in Madagascar, planning a less stressful future by sticking to just producing music in the studio.

The director admits that this ending now seems chillingly false. Of course, it read very differently in October 2017, when the film had a very limited, initial release. It only ran in Scandinavian movie theaters and on Netflix in western Europe, buttressed by a single showing in select US theaters. Just six months later, Avicii died and while details weren’t confirmed, his family said he “could not go on any longer”. He was 28.

Because of that whiplash turn of events, rumors swirled that Netflix had abruptly pulled the film. But, according to Tsikurishvili, “the film was never supposed to have a wider release back then. What happened was that people tried to watch the movie in the US and UK and couldn’t find it. So, they ran with the story that it had been pulled.”

The documentary’s new, wide release will inevitably invite a forensic scrutiny. Even the director says he now sees the film “in a very different way. Watching it, I felt everything you can think of. It was a very emotional experience.”

Facebook Twitter Pinterest Especially since Tsikurishvili and Avicii had bonded so deeply during their marathon filming sessions. The director first met the DJ, who was born Tim Bergling, six years ago at a dinner in their mutual home city of Stockholm. The musician asked the director to helm a documentary about a charity project he had started which donated $1m to African hunger programs. “It clicked from the beginning,” Tsikurishvili said of their relationship.

Neither he nor Avicii had any preconceived notions of what the focus of the documentary would be. But they did know they already had a dramatic story to tell. In his early 20s, the DJ had gone from sleeping on people’s couches to becoming a superstar artist, generating tens of millions of dollars while headlining festivals around the world. A key figure in his rise was his manager at the time, Ash Pournouri, who comes off in the film as savvy and dedicated, but also driven to the point of obsession. Avicii’s talent gave Pournouri plenty to work with.

The DJ brought a wider musicality, and a broader sense of innovation, to EDM than any other artist of the time, resulting in crossover pop hits such as Levels and the ground-breaking electro-country smash Wake Me Up. But serious issues began to emerge as far back as 2012. For 11 days that year, Avicii was hospitalized in New York with acute pancreatitis, brought on by alcohol abuse. The film shows him in 2014 in Australia undergoing surgery to remove his appendix and gallbladder, after another flare of the disease. In the film, Avicii talks about why he turned to drink. “If I don’t [drink] I gradually get more and more nervous before shows,” he says. “Alcohol just stops that.”

His doctors compounded the problem by enabling a dependence on drugs. They wrote scores of prescriptions for drugs such as gabapentin and the opioid Percocet. In the film, Avicii responds by shrugging: “I guess they know what they’re doing.”

His passivity bled into his relationship with the business. For much of the film, Avicii lets his manager drive him. “I didn’t take the time to think about what I really wanted to do,” he says. “I just went along with the flow. I was running after an ideal happiness that wasn’t my own.” 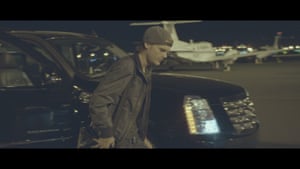 Facebook Twitter Pinterest In the film, even his manager admits that “Tim is going to die, with all the interviews, radio tours and playing. He’ll drop dead.” (Pournouri did not respond to an interview request for this article.)

Beyond his exhaustion, it seems Avicii suffered from a kind of social anxiety, which was greatly exacerbated by the demands of fame. “I don’t think he knew what it takes to be as successful as he became,” the director says. “He was never comfortable as the center of attention. He felt stardom is something that human beings have made up. It’s nothing real.”

In the footage, Avicii quotes Carl Jung’s insights about introversion, a characteristic he deeply identified with. “I prefer intuition to sensation,” he says.

Another source of pressure concerned Avicii’s feeling of obligation to financially support his management team. “He never wanted to do anything to someone else that would cause any problems,” Tsikurishvili says. “He felt responsibility to take care of his co-workers.”

Much like Tom Petty, who stayed on the road despite severe health and pain issues, Avicii paid a heavy price for that sense of obligation. The breaking point came before a string of shows in Las Vegas which Avicii felt he had to cancel. Despite his insistence on backing out, Pournouri grouses on camera that the DJ “doesn’t understand the value of money”.

As to why the star wanted so uncensored a documentary to be released, the director can only speculate. “All of us, in one way or another, want to share our own stories of who we are and where we come from,” he says. “Tim was such an honest person. He was so honest about himself.”

While Tsikurishvili says he never discussed the specifics of the film with its star, he says the last thing Avicii told him, when they met last December, was that he thought the film was great.

The director adds: “The documentary gives a very close explanation of how he felt. I’m happy and thankful that we were able to put so many of his years on film, to show others how he really was. As a collaborator, and a film-maker, that’s what I can do for him.”