'We've Already Gone This Far' Counts The Cost Of War 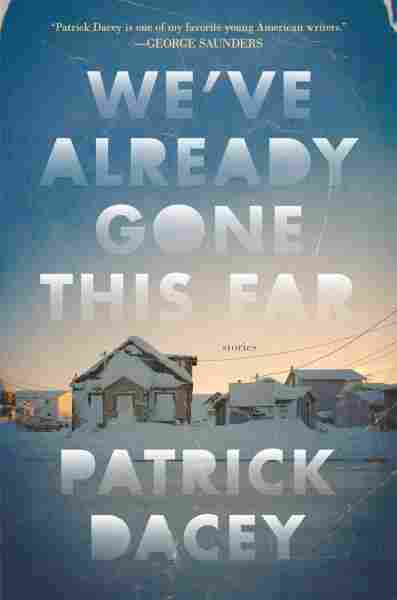 How? Amazon Independent Booksellers The total cost of the wars in Iraq and Afghanistan is expected to approach $6 trillion, but it will be decades before we know what we've truly lost. We have a generation that's never really known peacetime, and thousands upon thousands of service members who have returned to the country wounded in ways the rest of us might never understand. The wages of sin might be death, but the wages of war could be something even worse.

This America, trying to recover from war and economic meltdown, is the setting of Patrick Dacey's excellent debut collection, We've Already Gone This Far. The 13 linked short stories in the book take place mostly in Wequaquet, a fictional, hardscrabble small town in Massachusetts that's been hit hard by the economy, the wars, even the weather. "We've had nothing but gray sunless days here," one character observes. "The ground is trapped under mounds of snow, and the relentless cold charges every person in town with a certain kind of dread and fear."

The collection opens with "Patriots," about a woman who impulsively decides to steal an American flag from her the yard of her neighbor, the mother of a soldier stationed overseas. She can't explain her theft: "I don't know why. I respected her patriotic pride. Really, I did." When her neighbor's son is killed by friendly fire, she's forced to come to terms with her own sad, lonely life.

It's a relentlessly sad story, and a touching one, if a bit thin. It also sets the tone for the rest of the book, which explores solitude, depression and a creeping kind of nameless dissatisfaction. In "Friend of Mine," an ex-high school football player forms a relationship with his former coach. The narrator is aimless, unsure of what he wants to do with his life after he's rejected his original goal of becoming a firefighter: "It's just that I don't care so much anymore about saving lives, considering there're so many [worthless people] in the world and you might save some life that doesn't deserve to be saved ... you have to live with the guilt that you were the one who kept him in the world when it was all set for him to burn."

While not every story is perfect, the best of them are harsh but beautiful reminders of the cost of wars ― not just the ones overseas, but the ones we wage against ourselves.

There's not much light in We've Already Gone This Far, but Dacey is at his best when he employs his dark sense of humor. In "Mutatis Mutandis," a widow decides to go on a reality show where she'll be given free plastic surgery, including liposuction, a face-lift and breast augmentation. An employee of the program urges the woman to cry as much as possible when she's on the air: "You may want to consider crying, if possible. Think of something horrific. Think of a little girl with burn scars on her face or a puppy hit by a car lying in the street twitching."

There are also some funny moments in "Ballad," told in the voice of a songwriter addressing his child in a long stream-of-consciousness rant: "That's what a good song does takes you back in time sets you down next to old friends and lovers well hopefully not her old lovers especially not that Australian dude the two of them out in the wild looking at kangaroos taking peyote can hear that stupid accent in my head." It's an experiment that doesn't quite work, but it's ambitious and heartfelt.

The best stories are the two final ones: The first, "Incoming Mail," written as a letter from a woman to her soldier son overseas, the second, "Lost Dog," a narrative of the war from the soldier's perspective. Dacey's portrayal of the mother is stunning; she's lonely, afraid and desperate, aching to believe in something. "Lately I feel like there's this voice that flows through me ... and it tells me to relax and be calm, everything's going to be all right. And for the first time in my life I believe that's true." It's followed immediately by "Lost Dog," a brutal gut punch of a story that suggests everything's not going to be all right after all.