Tied up and inked on Monday morning, the Brazilian was one of two midfielders arriving at Allianz Arena post-Hertha, with the highly-fancied, just-turned-20 Mickaël Cuisance coming in from Borussia Mönchengladbach.

T...ed up and inked on Monday morning So why is it, after such decisive action, that more questions abound than answers? The result itself in the opener could easily be put down as just one of those things with Hertha who – despite being bold and brave under debutant coach Ante Covic, and suggesting they might be considerably more must-watch than in seasons past – rode their luck, even if Borussia Dortmund’s 5-1 Saturday afternoon stroll against Augsburg means that last season’s challengers have an early advantage. Bayern had 70% of the ball and almost three times as many shots as the visitors.

Borussia Dortmund’s 5-1 Saturday afternoon stroll It’s a question of context, with Niko Kovac not looking 100% bulletproof, and the memory of the failure to break inferior opponents in this habitual bearpit in the first half of last season not totally forgotten. The defensive vulnerabilities of last term still linger, particularly at moments like the one in which the excellent Marko Grujic strolled through to round Manuel Neuer and put Hertha in front at the end of a tasty team move in the first half. Record signing Lucas Hernandez, some will not unreasonably argue, was only an unused substitute here, having had his pre-season curbed by injury.

Some of the doubt surrounds Coutinho himself, clearly an asset (and described as “a boon to the Bundesliga” by Dortmund’s Julian Brandt after his team’s win) but not so clearly part of a transfer market plan that looked so firmly on track when Benjamin Pavard and Hernandez were signed and sealed so early. After an interminable wait, Ivan Perisic and Coutinho have recently arrived; both stellar talents, but not the young stars earmarked to take the team forward early in the summer.

Where Coutinho will fit is one question. He could (and probably should) inherit James Rodríguez’s old No 10 role. He could be used on the left, cutting in to great effect as he often does, as an alternative to Kingsley Coman, though he is a very different type of wide player. Some have even suggested he could be the deeper-lying playmaker that Bayern could do with, although this seems a little more far-fetched – and confusion of how he should best be utilised was a big part of Coutinho’s failure to fully fire in Catalonia. How much his confidence will need piecing back together after enduring some chastening recent months at Camp Nou is another doubt. Bayern need him to be a leader, and the sooner the better.

Coutinho, Hernández and the rest will be tasked with making Bayern’s home a daunting destination again – as they did on occasion in last season’s run-in, crucially in the 5-0 Der Klassiker destruction of Dortmund in April which swung the title race. As he spoke to the media after the match, Hertha’s Dodi Lukebakio tried to suggest it already is. “It’s always hard to play here,” the former Watford forward ventured gamely, though it was tough to take too seriously from a man whose first-half equaliser meant he now has four on his last two trips to the Allianz, having scored a hat-trick on loan with Fortuna Düsseldorf last autumn. His team’s daring had suggested otherwise. 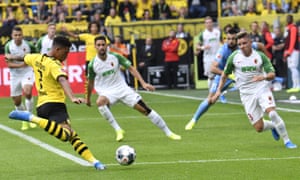 Facebook Twitter Pinterest Teams will always dare at Dortmund. Augsburg did, with Florian Niederlechner giving the visitors the lead after 31 seconds – the second straight opening day of the season that BVB had gone a goal down at home in the opening minute. The other aspect in common with last year was that the home side hit back, and hard. Paco Alcácer snaffled a quick equaliser and ended the afternoon with another following a second-half blitz, punctuated by other goals from Jadon Sancho, Marco Reus and debutant Brandt. Augsburg’s debutant goalkeeper Tomas Koubek looked swamped, with his raft of good saves overshadowed by a couple of major howlers.

It was such a faithful facsimile of Lucien Favre’s side last year that it felt difficult to draw many conclusions. We knew they could do all this already, and bigger and tougher tests are yet to come. More revealing were a clutch of more subtle tells of greater confidence, and of greater expectation. Axel Witsel ran the game, off the chain against overwhelmed opposition and able to dictate in a manner than reminded us that yes, he used to be a winger.

When Reus went off for a late rest it was the returned Mats Hummels, rather than Reus’s mate and replacement Mario Götze, that took on the captain’s armband. Hummels’s comeback, after the manner in which he went back to Bayern in 2016, has stirred mixed emotions in the fanbase but he was bought to play a specific dual role of calming defensive presence and of veteran leader.

His receipt of the armband was “more than a gesture”, in the words of Ruhr Nachrichten’s Dirk Krampe. Finally, the words of the players after full-time did not hide what their target is. “Of course we noticed that Bayern didn’t win,” midfielder Julian Weigl said. “It spurred us on all the more to set a marker, and we succeeded.” Coach Favre might have ducked any title chat, but his players nailed their colours to the mast. “We all watched the [Bayern] game in our hotel rooms,” said Brandt, while claiming that their rivals’ fortunes were “of secondary importance” to them. “We can be courageous and open,” Weigl continued. “We have a great squad and we are a great club.”

Nobody on either side is hiding their light under a bushel, and the race for the Bundesliga promises to be all the better for it.

Bundesliga • RB Leipzig’s own start underlined that they shouldn’t be left out of the title conversation either. Faced with the cold shoulder on their trip top-flight first-timers Union Berlin – the club’s fans remained silent for the game’s first 15 minutes in an anti-Red Bull protest – they heated things up on the field, eventually running out 4-0 winners and showing Union just what the elite are all about. The Julian Nagelsmann influence appears strong already. 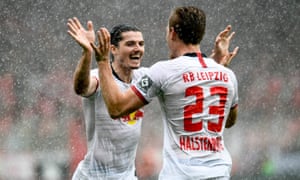 Facebook Twitter Pinterest • Saturday night’s big one between Borussia Mönchengladbach and Schalke – and their own new coaches, Marco Rose and David Wagner respectively – was a bit of a damp squib. Gladbach, with Champions League ambitions, might not be rushing to try out new striker Breel Embolo in the No 10 role again, certainly.

• Werder Bremen made history, playing their 1,867th Bundesliga game and surpassing the now-relegated Hamburg’s record. They were unable to mark it with a win, though, pickpocketed by a canny Fortuna Düsseldorf, who won 3-1 at the Weserstadion.