It may not be the most endearing way of framing it but there is no escaping that its European counterparts are viewing the Bundesliga as their guinea pig, learning from their best practice and, perhaps, any mistakes. After a few years of spreading its wings, creating an international arm to the business and beginning to chase down the Premier League’s domination of global popularity, the Bundesliga now has at least a few weeks of a clear run at a hungry worldwide football audience. It will be under the microscope from every imaginable angle.

...ootball/who-scored-blog/2020/may/14/bundesliga-team-season-so-far"> Before the restart there appears to be little complacency on the part of the Deutsche Fussball Liga (DFL), and the cliche about taking it one game at a time has never been more apt. This weekend is about “earning the right” to do it all again next week, as the DFL’s chief executive, Christian Seifert – the most visible figure in delivering and communicating the details of the resumption plan – says.

They couldn’t feel much more prepared than they are in the circumstances, with the DFL’s Hygienekonzept running to 50 (publicly available) pages on everything from training and match-day protocol to television production and away-game procedures. Yet as the Germany national team physician, Dr Tim Meyer, who has been heading up the safety and hygiene task force, has said, mapping out a meticulous plan and living it are two distinct things.

We have already had the Salomon Kalou incident at Hertha Berlin, and players and staff are having to unlearn the instinctive. The Werder Bremen coach Florian Kohfeldt spoke this week about how he is having to change his “tactile” coaching style, resisting the impulse to “put an encouraging arm around a player”.

This is to be negotiated amid the simple joy, for many of these players, of being together again, training (and living in quarantine) as a group with something concrete for which to aim. The Bundesliga’s teams have made the most of the opportunity to rebond, albeit in different ways. Borussia Mönchengladbach have moved into their own hotel in the grounds of Borussia-Park, eating inside the stadium every morning, while Union Berlin went to a training camp 300km from home, near Hannover.

The pressure – implied or otherwise – on the players has been something the clubs have been keen to address. Nobody is obliged to play is the message, with Gladbach’s sporting director, Max Eberl, emphasising: “The voluntary nature of this has always been our top priority,” and other clubs taking a clear stance that any player who didn’t feel comfortable with playing would not be punished. Some elements of the German media are sceptical, believing that to break ranks would go against the dressing-room code, and that significant peer pressure exists. 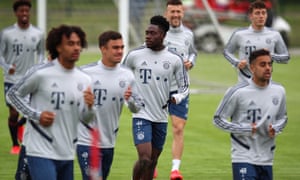 Facebook Twitter Pinterest The DFL has never hidden from the fact that not finishing the season would have severe implications for many of its 36 professional clubs in the top two tiers, with more than €300m (£260m) in television rights revenue still due from broadcasters. With confirmation on Thursday that the bottom two would be relegated and the top two from 2 Bundesliga promoted were the season to be abandoned, there is motivation aplenty.

It may seem anachronistic to mention in the current climate but already this could be a potentially decisive weekend in the title race. Bayern Munich, the leaders, begin again on Sunday, with a trip to Union – which would be a lot more challenging in front of a full Försterei – but before that is the Revierderby between Borussia Dortmund and Schalke. If Dortmund were to fail to beat their rivals and Bayern won, they could be up to seven points adrift of the team they pushed mightily close last season but have won seven successive titles. Dortmund’s margin for error is small as they go into Saturday’s game not only without the influence of 80,000 supporters (though Sky Deutschland has an option for viewers at home to have club-specific chants layered over the top of each match broadcast) but also without the central midfield pair Axel Witsel and Emre Can.

The table as it stands offers at least the prospect of a contest, with only six points separating a top four completed by RB Leipzig and the early-season pacesetters, Borussia Mönchengladbach. The tempo and youth of Julian Nagelsmann’s prolific and developing Leipzig side, alongside Marco Rose’s moulding of the latter into one of the division’s must-watch teams, promise to be two of the resumption’s big draws.