Yet I have an admission. Whenever I saw or encountered other Chinese-Australians speaking fluent English myself, my jaw would hang in disbelief. Seeing Chinese-Australians – or any Asian-Australians, really – on TV was rare in the 1980s and 1990s. But when people like Annette Shun Wah presented on SBS, Elizabeth Chong showed Bert Newton how to stuff a chicken with spring onions, or Dr Cindy Pan discussed prophylactics on Sex/Life – and with Australian accents, like mine! – my brain couldn’t process it. Weren’t my family the only ones?

...m/tv-and-radio/2019/jul/19/essie-davis-on-playing-a-feral-nun-in-lambs-of-god-and-the-broken-catholic-church"> Perhaps. As MP Tim Watts writes in his forthcoming book on Chinese-Australian relations The Golden Country, the late 1980s – a decade after the formal abolition of the White Australia policy – saw less than 3% of the Australian population claiming Asian heritage. What compounded being outnumbered for me was growing up in a particularly monocultural part of Australia. I could count the number of other non-white students in my year level on a single hand. I had no idea how there could be other Chinese-Australians out there, let alone how some families – like Shun Wah’s and Chong’s – could trace their lineage in Australia back several generations. 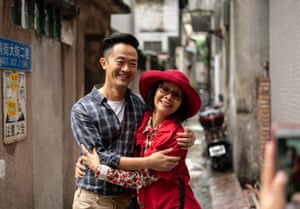 Facebook Twitter Pinterest Most of that confusion stemmed from how ignorant I was of the history of the Chinese in Australia. In high school history classes, teachers might have mentioned the Chinese presence during the Gold Rush and touched on the Tiananmen Square massacre. Nothing else even began to explain how Mandarin become Australia’s most spoken language after English, and Cantonese our third-most. Or how “Chinatowns” came to exist in most capital cities, and Chinese restaurants featured in the main street of almost every regional town. Or how we got to where we are now: a nation that has roughly 1.2 million Australians with Chinese heritage, and – more broadly – one in 10 Australians with Asian ancestry. That’s roughly proportionate to the percentage of African-Americans in the United States.

In my family, we had our own mysteries. No one can ever fully comprehend the lives and struggles of their ancestors, but when you’re the child of migrants, your forebears may as well have come from the moon. My goong goong (maternal grandfather) was the son of a concubine to a merchant, survived the Sino-Japanese war and escaped civil war and poverty to arrive in Malaysia. My ma ma (paternal grandmother) lived through the same wars, lost siblings during escapes and never learned to speak English in the years she lived Australia. It’s not straightforward interviewing my grandmother to collect those stories. It’s not as though I can just hop onto Ancestry.com and easily trace my roots.

So earlier this year, a small crew – led by documentary writer and director Alex Barry – collaborated with my family to remedy this. We shot a major two-part documentary for the ABC that fills in the blanks of my family story. At the same time, we also discovered how Chinese-Australian history isn’t adjacent – or a sidenote – to Australian history, but been at its core for centuries, well before white arrival. It took me – a tertiary-educated Chinese-Australian – travelling between remote Eastern Arnhem land to the Chinese megalopolises of Shanghai and Guangzhou, to fully comprehend this. 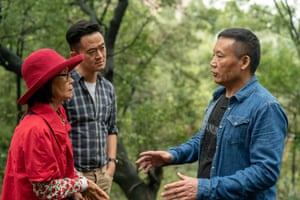 Facebook Twitter Pinterest Both Aboriginal oral histories and the archaeological record shows the Chinese drove Australia’s first global trade in the Asia-Pacific well before the first fleet’s arrival. Oral histories tell of direct contact between Chinese and Yolngu people. (A coin from the Qing Dynasty found on a remote island off the Northern Territory in 2014 supports that claim.) Other moments in the documentary happily discombobulated me, like watching a Yolngu elder use branches like chopsticks to eat fish, and seeing a photo of a dynastic Chinese family with multiple wives, which appears to be taken in Imperial China, but was actually taken in Cairns in 1904.

A coin from the Qing Dynasty Australians instinctively know history has been denied to us. We’re starting to see that hunger for more knowledge sated in the mainstream. With every copy of Bruce Pascoe’s Dark Emu read (back in the bestseller charts a half-decade after its release), Australia’s understanding of Aboriginal architecture, agriculture and engineering is being rewired. We are beginning to accept our fraught histories with race, such as our racist history of blackface; the legacy of the White Australia policy and Stolen Generations – shameful evils only dismantled a mere generation ago. This is important work: when only a limited version of history written by the powerful few is venerated, it veers towards propaganda.

blackface the White Australia policy Stolen Generations Similarly, our aim with Waltzing the Dragon has been to interrogate and even dismantle existing myths about the history of the Chinese in Australia. But none of this work is just about the past. Right now, Australia is staring down an uncertain future with China: this year, we’ve had Chinese warships in Sydney Harbour and ongoing protests in Hong Kong. All Australians should be concerned – if not appalled – at those developments. At the same time, we also need to acknowledge some of our other anxieties – over apparent Chinese invasions in our real estate markets, university enrolments and baby milk formula aisles – stem from old-fashioned anti-Chinese racism in a country whose history has been defined by it. Let’s not forget: Australia largely federated to ensure it could keep out the Chinese. We’re also a country that only had a 23-year reprieve between the end of a whites-only policy and the start of an anti-Asian political party entering parliament.

For me, one question that came up repeatedly as we shot the documentary was, “How didn’t I know this?” Australian history, for far too long, hasn’t just been riddled with deliberate erasures, but defined by them. It’s time we filled in the gaps together, as a nation. It’s the only way we’re going to become more fluent in confidently telling a rich and complex Australian story.