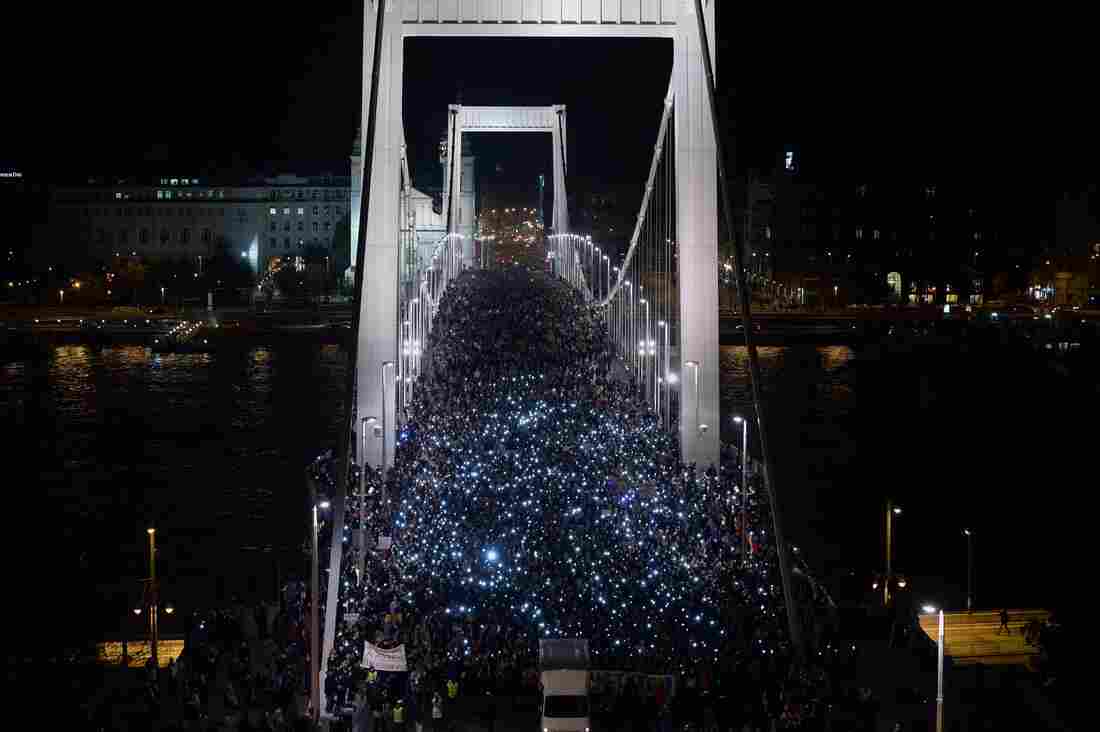 Enlarge this image Thousands participants march accross the Elisabeth bridge during an anti-government rally against the government's plan to tax Internet usage.

Some 100,000 people took to the streets of Budapest, Hungary, on Tuesday to protest a proposed plan to tax Internet use.

...times.com/2014/10/30/world/europe/hungarians-march-against-proposed-tax-on-internet-use.html?_r=0">The New York Times reports Balazs Gulyas, 27, a former member of the country's socialist party, set up a Facebook page, which spurred the protests. Gulyas told the paper that Prime Minister Viktor Orban's plan is an attempt to "create a digital iron curtain around Hungary."

The New York Times reports "The government denies that the tax was devised to inhibit access to information, saying it is extending an existing tax on telephones, to address a growing share of communication that has moved online.

"Zoltan Kovacs, a government spokesman, described the protests as an attempt by the country's splintered opposition to organize around a movement that it pretended was nonpartisan. Mr. Gulyas, he said, is 'but one of the many political activists who try to camouflage a political movement as civilian.'"

Reuters explains the idea of a tax on Internet usage was first floated last week.

According to Reuters, at first, the government planned to tax data transfers at a rate of 62 cents per gigabyte, but faced with protests, it decided to cap the tax at $2.89 per month for individuals and $20.62 a month for corporations.

According to Reuters The concession, however, was not enough to keep Hungarians from the streets.

Instead, Bloomberg reports, the protests swelled and became anti-Orban. The news service explains:

Bloomberg reports "The Internet tax is a symbol of the government's authoritarianism," Zsolt Varadi, a co-founder of the defunct iWiW social-media website, told the crowd in front of the Economy Ministry in central Budapest yesterday. 'We not only need to defeat the Internet tax, we need to believe that we are capable of criticizing and influencing the state.' ...

"'Orban's party won all three elections in Hungary this year, including the April parliamentary ballot that gave him a second four-year term with a constitutional majority. In July, the prime minister called for replacing liberal democracy with an 'illiberal state,' citing Russia and Turkey as possible models, while trying to hold on to the country's European Union membership, the source of billions of euros of funding.