“The draw is very difficult to accept,” sighed the Borussia Dortmund coach. How often does a team hold the league leaders to a draw and make those leaders grateful for a point? It had been a haphazard, difficult-to-explain evening. “It’s a lucky point for us,” confessed RB Leipzig manager Julian Nagelsmann. “It felt like a win tonight.”

Borussia Dortmund ...st-male-footballers-in-the-world-2019"> He had every right to feel like that, as his opposite number had to feel the way he did. Nagelsmann’s side arrived for the most top of Top-Spiels in great nick, in first place and riding a run of six successive Bundesliga wins in which they scored an average of more than four per game. It was some sight, then, see the first half unfold. Dortmund, after being hemmed in by their opponents’ press for the opening 10 minutes, proceeded to unload one of their best performances of the Favre era on their visitors, who initially had no answer.

Bundesliga Julian Weigl’s opener was a touch fortunate, with Leipzig goalkeeper Peter Gulacsi diving around his shot from outside the box, but it had been coming and the tide was strong. When Jadon Sancho set up Julian Brandt for an exquisite pirouette around Dayot Upamecano and a rifled finish into the far corner, Dortmund were fully ablaze and Leipzig were hopelessly fumbling in the dark for a fire blanket.

The Jekyll and Hyde nature of Dortmund’s display was, however, personified by Roman Bürki. Gulacsi’s opposite number made two saves of great quality in quick succession at the end of the first half, from Yussuf Poulsen and Timo Werner, having been rendered a virtual spectator for most of it as his side dominated. Then, just 72 seconds after the interval, Bürki came out to head a long ball away but nodded it straight to Werner, who gratefully rolled it into the net. Brandt, having provided the high point of the match, then touched a nadir by gifting Werner a leveller with a blind backpass. 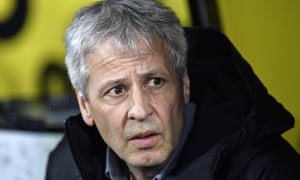 Facebook Twitter Pinterest Beating Leipzig once is hard enough at the moment. Dortmund set themselves the task of doing it three times, giving away another equaliser, expertly snaffled by substitute Patrick Schick, after Sancho had given Dortmund the lead back in scoring for a seventh straight game. Favre’s team play some incredible football. They also play some incredibly careless football. Even outside the goals they conceded in that frenetic second half, they looked vulnerable every time they lost possession, defending too high up the pitch and prone to Leipzig’s lightning counters, with the pace of Werner and his potential to outpace Mats Hummels in particular preying on Schwarzgelben minds.

The turnaround hurt. Not just because of how much Dortmund had put in for relatively meagre reward, but because of who it was against. In Leipzig’s fourth season of top-flight football, there continues to be a crackle to this fixture. In February 2017, when they first visited Westfalen after promotion, the Gelbe Wand met them with a sea of banners panning their model, their morals and Red Bull’s entry into the German game, the tip of an inhospitable iceberg that later saw Dortmund fined €100,000 and their Südtribüne closed for a home game. A few banners remained on Tuesday night: “Null toleranz gegenüber RB Leipzig”, “RB verpiss dich” - and their players were met with a barrage of whistles when they entered the pitch, but the hatred has been dialled down a notch. It’s more through necessity that any change in sentiment, with the reality being that Leipzig are here to stay. 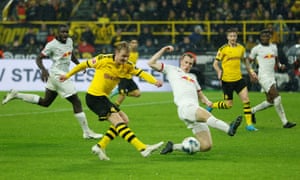 Facebook Twitter Pinterest That is more evident than ever this season, with Nagelsmann having taken them up a level already. The coach has better players at his disposal than he did at Hoffenheim, as a bench that had the likes of Schick and Christopher Nkunku on it on Tuesday night attested to. There is no doubt that he is drawing more from them than even Ralf Rangnick did, however, and his team have been not far off untouchable in the last two months, since blowing their cobwebs from their hitherto tentative home form. On the road, there’s never been a doubt about them, which made the first half here all the more stunning.

Yet they found a way, even if some will say that way was largely being available to accept early Christmas gifts. Taking a point from such an unpromising situation was proof of their mettle, though the ambitious Nagelsmann was brutally realistic. “Our first-half performance was poor,” he chided. “In future, we need to make sure that we play with more conviction when faced with an important match such as tonight’s. We can’t afford to hide. We weren’t able to keep up during the first half.”

That first half is what Dortmund must cling to as they seek to continue their recent improvement, and to convince the world that they can contend for a title again. When the dust settled on this extraordinary spectacle one did wonder if, coupled with Leipzig freezing in the first half, all that we could really be convinced of is that Bayern’s pretenders will somehow find a way to hand them back their title.

• Borussia Mönchengladbach took advantage of Tuesday’s draw in Dortmund to go level on points at the top with an unspectacular 2-0 win over Paderborn. It was a vital win too, coming after straight defeats, and Marco Rose’s men just about avoided being stung by the bottom team’s increasingly eye-catching counterattacks.

• Bayern Munich set their supporters’ hearts more aflutter in Freiburg, during a game in which they looked like winning at a canter after Robert Lewandowski’s opener, and could well have lost after Vincenzo Grifo’s second-half equaliser. Bravo then to Hansi Flick, who replaced Philippe Coutinho with Joshua Zirkzee and then watched the 18-year-old put Bayern in front in stoppage time with a smart finish. Serge Gnabry added a third with the last kick of the game but it was all about Zirkzee, now the youngest-ever Dutchman to score in the Bundesliga.

• Werder Bremen continued their rough week with a humiliating 5-0 thrashing at home to Mainz. “There are no explanations for such a very bad game,” said coach Florian Kohfeldt. “It was disastrous.” They now have a huge game on Saturday away at Köln, who leapfrogged them out of the bottom three with a thrilling 4-2 win at Eintracht Frankfurt, coming back from two down.