His big productions, works such as In Your Rooms (2007) and Political Mother (2010), set to thundering percussive scores composed by Shechter himself, were as much rock concerts as dance pieces. They raged against demagoguery, totalitarianism and the death of truth. Specific targets for Shechter’s fury included the state of Israel, in which he grew up, and his mother, who, he announced on the soundtrack of ..."https://www.youtube.com/watch?v=4f_pXCUOrmM">The Art of Not Looking Back (2009) “left me when I was two years old”. These vengeful, noirish works were as compelling as they were physically deafening, but in pieces such as Survivor (2012), a misfiring collaboration with the sculptor Antony Gormley, and tHE bAD (2016), a formless “attempt to make a piece without thinking”, featuring dancers in gold unitards shouting “Motherfucker!” at the audience, Shechter seemed to have lost his way.

Political Mother The Art of Not Looking Back Survivor tHE bAD Men carry on the lolling, floppy bodies of dead women and whirl them around to waltz tunes from The Merry Widow

Grand Finale, which revisits Shechter’s familiar, apocalyptic stamping ground, is a strong return to form. Choreographers have described feeling pressured to constantly reinvent themselves, but the best work, as in other artistic disciplines, is often born of an assiduous mining and re-mining of the same strip. Shechter’s artistic vision has always been bracingly pessimistic, and the territory that he has made his own is a place of entropy, an end-time landscape of roaring winds and enclosing shadows, in which men and women caper frenziedly as extinction draws ever closer.

In Grand Finale, Shechter gives us a ragged phalanx of the lost, battling against a maelstrom of sound and enclosing darkness. An onstage sextet plays Shechter’s Tchaikovsky-inflected score, backed by a recorded, and very loud, percussion track. In response the dancers shuffle, shudder and whirl with manic abandon. Arms are supple-wristed and outflung, hips and shoulders are loose, centres of gravity are low. Overcome by death or exhaustion, bodies fold like string puppets. 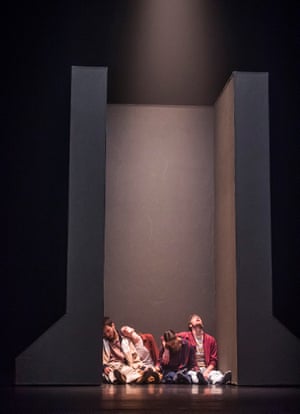 Facebook Twitter Pinterest As in his earlier work, Shechter seems to be expressing an anguished loss of belief. In personal integrity, including his own (“I cheated on my wife,” his recorded voice tells us in his 2016 work The Barbarians in Love, “I fucked someone else”), in society and its institutions, and in the consequential nature of human life when faced with the vast indifference of the universe. In his impression of a fatally fractured society, of a centre that cannot hold, we see our own panicked times reflected. There’s a repeated motif in Grand Finale of men dancing with female corpses. They carry on the lolling, floppy bodies of dead women and whirl them around, limbs flailing, to sugary waltz tunes from The Merry Widow. Again and again in Shechter’s work we see this hopeless striving for order – for things as they were before – in the face of chaos and collapse.

If all of this sounds grim, and the ultimate danse macabre, Shechter’s choreography is often very beautiful. Impulses ripple through swaying bodies, arms and fingers unfurl, light catches the turn of a neck. There’s a wonderful moment when the 10-strong cast stand motionless, arms and fingers outstretched. It’s not a freeze, it’s a suspended moment of rapture, and it makes you wonder if, despite everything, things might just turn out all right.

Much of the credit for the dramatic look of Grand Finale must go to the lighting designer Tom Visser, who paints the stage in downpouring washes of darkness against which the dancers glimmer and flicker. At times it’s like watching scraps of old film that have been haphazardly lashed together. There’s a sense of narratives starting to unfold, then cutting away and dissolving. 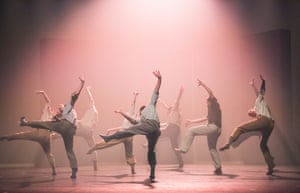 Facebook Twitter Pinterest Tom Scutt’s set, which we rarely view except in near-darkness, consists of a half-dozen movable monoliths. These might be tombs, memorials or standing stones. At times they constrict the performers like prison walls. They’re clearly central to Shechter’s vision, but their appearance tends to signal the points at which the piece loses shape and forward momentum.

Like many an auteur choreographer, Shechter too often stays his hand when he would be better advised to cut, and cut deep. Grand Finale is in two parts with an interval, and in both halves Shechter ignores natural end points and lets the work meander on so that its impact dissipates. There’s too much repetition, and too much trundling around of the set. This is a piece with many virtues, but it gives the impression of having been expanded to fill a full-length programming slot, rather than edited to its most telling and dramatic length. Cut to the bone, and perhaps to a single act, Grand Finale could be Shechter’s defining work. But it’s not there yet.