The replica jewel – so delicate it needed emergency overnight repairs before the display – will be at the National Museum of the Royal Navy in Portsmouth Dockyard from 21 October – Trafalgar Day.

National Museum of t...e Royal Navy It will be shown beside a black felt cocked hat, identical to those in which Nelson wore it, newly made by the admiral’s hatters, Lock & Co, which still keep his measurements in their London workshops.

The Chelengk, a plume of more than 300 diamonds, was presented by Sultan Selim III of Turkey after Nelson’s victory at the Battle of the Nile in 1798. It was reputedly taken from his turban and said to be the first such decoration presented to a non-Muslim. 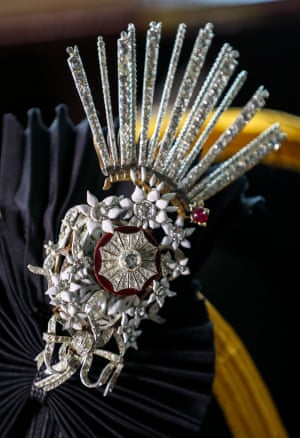 Facebook Twitter Pinterest It included 13 diamond sprigs representing the ships sunk or captured by Nelson in the battle. The admiral wore the jewel on his hat for the rest of his life, setting a fashion that was copied by many admirers. He was so proud of it he added its image to his coat of arms.

He described the original as “one of the most historic, bizarre and instantly recognisable jewels in British history” – so intimately connected with Nelson’s image that it was even included in the towering memorial column in Trafalgar Square.

The original had been on public display many times after Nelson’s death, until it was stolen from the National Maritime Museum in the early hours of the morning of 11 June 1951. The thieves used a folding ladder to break in through a window and smashed an 8ft glass case to get at the jewel.


It had been inherited by Nelson’s brother and passed down through the family, gradually losing its clockwork and some of the decorative details, until it was sold in 1895 for £710.


In 1929 it was bought for the nation by the heiress Lady Barclay and displayed with other memorabilia in the Painted Hall in Greenwich, where Nelson’s body had lain in state after his death at Trafalgar.

After the second world war it was included in a Nelson display at the museum from which it was stolen.