Poll: Sanders Rises, But Socialism Isn't Popular With Most Americans 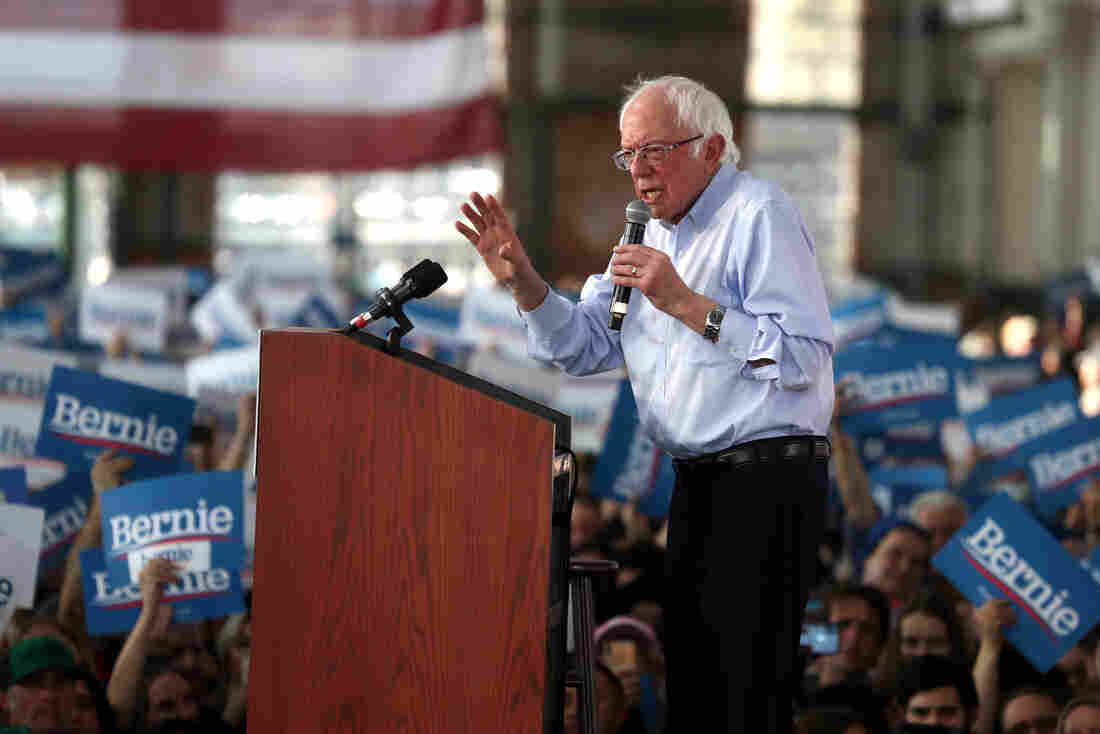 Enlarge this image Democratic presidential candidate Bernie Sanders speaks during a campaign event on Monday in Richmond, Calif. The independent senator identifies as a democratic socialist.

Vermont Sen. Bernie Sanders is ...ur-marist-poll-sanders-leads-bloomberg-qualifies-for-debate">rising in the polls among Democrats, but questions about his electability against President Trump persist because he self-identifies as a democratic socialist.

rising in the polls among Democrats A new NPR/PBS NewsHour/Marist poll backs up the idea that the label could hurt him.

Asked about their impression of socialism, 28% of adults said they have a favorable view, while 58% said they had an unfavorable one.

Poll: Sanders Leads The Field, Bloomberg Qualifies For His 1st Debate If socialism is so unpopular with Americans, how can Sanders be on the rise in the Democratic primary? Because Democrats and, more specifically, progressives view socialism favorably. Half of Democrats said so, while more than two-thirds of progressives did.

Don't see the graphic above? Click here. Approval of socialist declines as age rises. But even 50% of Gen Z and millennial respondents (ages 18 to 38) had an unfavorable view of it, as opposed to just 38% who had a favorable one.

Suburban voters, who have been trending with Democrats since Trump's election, are overwhelmingly against it 27% to 61%.

Capitalism, on the other hand, was viewed overwhelmingly favorably 57% to 29%, by U.S. adults. But a majority of progressives (52%) had an unfavorable view of capitalism, as did a plurality of African Americans (45% to 37%).

Voters Of Color Are Set To Have A Bigger Say As Democrats Enter A Crucial Phase The views of capitalism versus socialism is one reason why Republicans prefer to face Sanders in the general election. They and veteran Democrats point out that Sanders hasn't yet faced the likely barrage of attacks around his economic belief system — Democratic socialism.

But Sanders, in this poll and others, does beat Trump in a head-to-head matchup, 48% to 45%. That's something his campaign and surrogates are eager to point out.

In June 2019, Sanders reiterated his case for Democratic socialism, calling for New Deal politics in the 21st century, in line with Western European countries that have policies like universal health care and paid leave.

Sanders reiterated his case for Democratic socialism In a 2015 Democratic presidential debate, Sanders said, "I believe in a society where all people do well, not just a handful of billionaires."

In a 2015 Democratic presidential debate Massachusetts Sen. Elizabeth Warren has tried to distinguish herself from Sanders by calling herself a capitalist. But she has slid in the polls, as progressives appear to have begun to coalesce around Sanders.

In the latest NPR poll, Warren is fourth with 12%, down 5 points from December, the last time Democratic preferences were tested.

1,100 Former DOJ Employees Call On Barr To Resign After Intervening In Stone Case Unfortunately for Warren, many of those who list her as their second choice are Sanders supporters. And that's the difficult position Warren is in. She most needs the support of progressives, who are largely supporting Sanders, and she has not been able to wrest them away.

Bloomberg and Biden, on the other hand, take equally from each other — 28% of each of their supporters said the other is their second-choice pick. Buttigieg, Sanders, Klobuchar and Warren follow.

The percentage of Americans saying the country is headed in the right direction was just 41%, but that represents the highest level since March 2012 in Marist's polling.

That's up 6 points from October. Half the country still says the country is headed in the wrong direction, but the 50% who said so is the lowest the poll has recorded since January 2011.

Don't see the graphic above? Click here. Part of that optimism is likely because of the economy. Unemployment was at just 3.6% for the month of January, the 12th straight month of sub-4% unemployment.

Trump Commutes Sentence Of Former Illinois Gov. Rod Blagojevich Trump is benefiting from that — 51% of all adults and 54% of registered voters approve of the job he is doing handling the economy.

That's higher than his overall approval rating of just 42% of all adults and 44% of registered voters. A majority of Americans (51%) still disapprove of the job the president is doing overall.

The strength of the economy is likely aiding Trump's reelection chances. Democrats seem to understand that he could be tough to beat, which might be why, by a 55%-42% margin, Democrats say picking a nominee who has the best chance of beating Trump is more important than someone who shares their position on most issues.

Not surprisingly, overwhelming majorities of Bloomberg and Biden supporters said it was more important to pick someone who could beat Trump, while the opposite was true for Sanders backers.

Nevada Voters Begin Early Caucusing On Saturday. Here's What You Need To Know Of Bloomberg voters, 70% said it was more important to beat Trump, and 63% of Biden backers said the same.

When it comes to Sanders, though, 60% said it was more important for the nominee to share their values.

Voters under 45 (59%) and independents (53%) and nonwhites (50%) were the most likely to say it was most important to pick someone who shares their positions.

One danger sign for Democrats is that nearly 1 in 5 Democratic voters or independents who lean Democratic say that if their preferred candidate doesn't get the nomination, they'll either stay home, vote for Trump or vote for someone else.

Of that group, 12% of Sanders backers said they would not vote for president if he is not the nominee.

Much of that is likely because it's the heat of the primary battle; these numbers might decline when there is an actual nominee and calls for unity.

Three-quarters (76%) of Democrats and Democrat-leaning independents said they would vote for the Democratic nominee, whomever that ends up being.

For all the disarray in the Democratic primary, registered voters say they would back a Democrat in their congressional district by an 8-point margin, if elections were held today.

That 48%-to-40% margin is the highest in the poll for Democrats since late October 2018, right before the midterm elections that saw Democrats swept into control of the House.

"There might be a lot of fights in those households right now," said Lee Miringoff, director of the Marist Institute for Public Opinion, which conducted the poll. "It's probably best to avoid talking about politics [in those homes] right now."