Revel Barker's memoir captures the madness of the old Mirror

In fact, they tend to be lightweight and pedestrian, chock full of names no-one beyond their own circle could possibly have heard of and relating incidents that have no resonance to anyone who wasn’t there themselves.

So I approached Revel Barker’s contribution to the genre, The Last Pub in Fleet Street: A Reporter’s Notebook,* with some trepidation. I am pleased to say I need not have worried. It is, for the most part, a great read.

gentlemenranters.com To borrow an immortal phrase in a football match report by a former Mirror sports writer (no, I won’t name him), his book is a game of three halves.

The first half is wonderful, replete with memorable anecdotes. There is a somewhat stodgy shortish patch in the middle, with too many details about forgettable “scoops”, and then it heats up again as he reaches the Maxwell era.

It captures the madness of life at the Mirror during its final years as Britain’s best-selling newspaper (before the Sun surpassed it in 1978). One early paragraph, as Mike Molloy stepped into the editor’s chair in 1975, sums up the absurdity:

“He inherited an all-star cast including Donald Zec, Keith Waterhouse, Don Wise, John Pilger, Marje Proops and Kent Gavin, but also a motoring correspondent who was disqualified from driving; a gardening correspondent with no garden; a slimming editor who was a stone overweight; a travel editor who was banned from flying on British Airways; and at least one feature writer who hadn’t written anything except his expenses in five years.”

Keith Waterhouse In a lengthy career that began on the Pudsey and Stanningley News, Barker went on to rub shoulders with celebrities such as David Niven, Sophia Loren and Elizabeth Taylor who, in those long-ago days, seemed delighted to talk to reporters.

Elizabeth Taylor He recounts tales of the drinking culture (the El Vino veritas chapter should not be missed), stories of seemingly unlimited expense accounts and anecdotes about the huge sums spent by a profligate management (for one Mirror event strawberries were flown in from Florida). 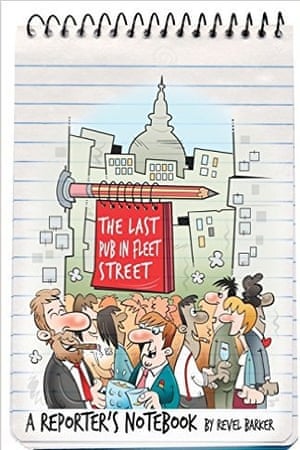 I recognised some of the stories because, down the years, they have been claimed by others. One that I remembered well involved a complaint by the Daily Mail’s Newcastle reporter, Mike Gay, to his news editor that rival papers had suddenly increased their staffing in the city. His memo said:


“The Mirror has three reporters here, the Express has four. Even the Sun has two. You have only me. Request advice.”

What Barker doesn’t reveal is the name of the sender. It was Ken Donlan, then news editor in the Mail’s Manchester office and later, albeit briefly, editor of the News of the World and long-time assistant editor at the Sun.

News of the World But my favourite was his retelling of a famous incident involving the Mirror writer Bill Marshall who got hopelessly drunk one day before filing his story.

A kindly friend on the Mail helped out. After filing his own copy he wrote another version and dictated it under Marshall’s name to the Mirror copy-taker.

Next day when the two men met up, Marshall - unaware of what had occurred - waved the Mirror bearing his article in front of his friend and said: “See this, arsehole? Don’t ever tell me I can’t write a story when I’m pissed.”

There are plenty of such tales in this entertaining book, which ends rather sadly with a lamentation about the Mirror’s fall from grace under Maxwell before he fell into the Atlantic in 1991. Barker recalls joyfully that he was once accused of teaching Maxwell to swim.