After training with drama school Fourth Monkey, Clark, who grew up in London and Norfolk, spent three years working on various projects, from ensemble theatre to student films. None of them seemed to lead anywhere and she was constantly getting rejected from auditions. In a bid to take back control, Clark joined Soho Theatre Writers’ Lab and resolved to write a part for herself.

Fourth Monkey ...t/writers-lab/">Soho Theatre Writers’ Lab Her debut play, Algorithms, was partly inspired by her relationship with the online world and her research into online dating and algorithms. (Clark has a scientific background, having studied natural sciences at the University of East Anglia.) “I started thinking about how much time I was spending scrolling and how that was making me feel,” she explains when we meet at a cafe in Fitzrovia, central London.

Algorithms Clark had her personal experience of dating apps, too. “I did a lot of online dating from 2012 to 2014 and that was such a weird time in my life, in terms of meeting new people,” she explains. “You’re trying to connect but you’re only ever having these surface-level connections and you’ll make a snap judgment within five minutes about whether you fancy someone and want to see them again. I was interested in this culture of swiping and almost not giving people a chance any more.”

Algorithms premiered at Soho theatre in 2018 and sold out its Edinburgh fringe run in 2019. Written and performed by Clark herself, the show follows a fictional woman called Brooke, who works for an online dating company. When Brooke’s girlfriend dumps her just before her 30th birthday, she dives full-throttle into endless evenings of internet dating herself. She recalls her pursuits and sexual encounters with people of all genders, ranging from hilarious to concerning. As Clark bills it, Algorithms is “a bisexual Bridget Jones for the online generation”. 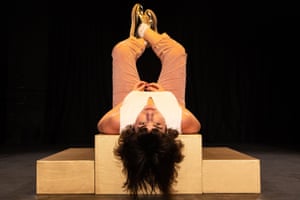 Facebook Twitter Pinterest All of this is entwined with Brooke’s relationship with her overbearing mother and the suffocating societal pressures she feels as a young woman. “It’s a show that explores looking for connection, and trying to find happiness and satisfaction in an online world where you’re bombarded with things telling you that you’re not good enough, or that other people are doing better,” says Clark, who credits Soho theatre dramaturg Jules Haworth and director Madelaine Moore for helping shape the script. Having written the show aged 27, Clark says Brooke’s “milestone” birthday felt far off. “So, it’s strange to be coming back to performing it now I am actually near turning 30,” she adds.

The play is intensely relatable to anyone who has grown up in the internet era. Despite having so many people just a message or swipe away, Brooke feels alone. Then there’s the anxiety induced by WhatsApp’s blue-tick read receipts. Or the show’s profound acknowledgment that social media has become fundamental both in forming romantic relationships and during the heartbreaking aftermath. (Facebook “stalking” features throughout.)

As a bisexual woman herself, Clark stresses Brooke’s visibility as such. “I wanted to write a bisexual protagonist, whose story was about anything other than the fact that she was bi,” she explains. “Partly because I had not really seen very many bi characters at all.”

She’s been likened to Fleabag creator Phoebe Waller-Bridge, a comparison that Clark says is “flattering”. She also cites Michaela Coel’s show Chewing Gum as an influence. Clark adds that music, too, played a big part in Algorithms, with dancing featured throughout the show. Clark listened to a playlist of artists she admired while writing, including Janelle Monáe, who she praises for being outspoken as a non-binary and queer person, and Lizzo. “So much of Lizzo’s stuff is about believing in yourself and seeing your worth,” adds Clark. 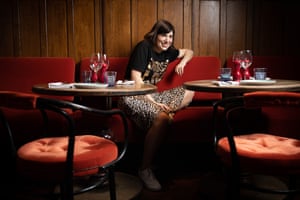 Facebook Twitter Pinterest Both Chewing Gum and Fleabag starting out as one-woman shows. Could Algorithms also move to TV? Nothing has been confirmed yet, says Clark, but she is writing a treatment. “There’s so much more you can explore in a TV show … it’s something I’d love to do,” she says. Indeed, she recently won the Stage to Screen prize at the TV Foundation’s New Voice awards, supported by Netflix, which is awarded to a “stage play with rich potential for TV”.

TV Foundation’s New Voice awards Clark now is preparing to return to Soho theatre with Algorithms and take it on a UK tour. Her day job, meanwhile, is as a “maze master” at The Crystal Maze Live Experience. “For any fans of the TV show, I’m basically Richard O’Brien but with more hair,” she jokes. Clark is also one half of the comedy improv duo A Little Bit of Tender with her friend Laura Evelyn. The pair make up relationship-driven scenes based on the audience’s suggestions. On top of all this, Clark is working on her second show, Gemini, which she hopes to take to the Edinburgh fringe in 2021. She says it is about queer friendship, love and lies.

The Crystal Maze Live Experience A Little Bit of Tender Clark is friendly and witty company, looping back to questions whenever she feels she has missed something out. She readily admits to being an “absolute perfectionist” and her performance of Algorithms is impressively polished. The actor is a dab hand at making people laugh, with Algorithms littered with sarcastic one-liners and hilarious details, from meeting rooms named after animals that mate for life to Brooke’s graphic tales about her sex life. Almost flawlessly, Clark flits between characters and accents, confidently orchestrating the crowd’s emotions. Although most of the storyline is made up, Clark reveals that the mortifyingly funny opening scene is based on real life. That is, when Brooke gets a call from her mum having accidentally shared photos of her bum in lacy pants to all her email contacts. One detail differs, however. “There was no butt plug,” she laughs.