Fast-forward nine years and today’s players are now a fixture in the world’s major concert halls, feted for their achievements, their education emulated, their maestro, Gustavo Dudamel, installed at the LA Phil and invited to conduct the most prestigious orchestras. Setting aside recent published claims of corruption, mismanagement and a culture of f...ar that have clouded the ensemble’s hitherto blue sky, it has found that with the deserved acclaim comes dread comparison, and here the cracks begin to show.

Gustavo Dudamel culture of fear Beginning a three-concert residency on London’s South Bank last week, they chose a Stravinsky programme of Petrushka and The Rite of Spring. This is a huge orchestra (last Thursday, more than 30 violins, 11 double basses, 13 cellos, 13 violas – not to mention platoons of woodwind and brass), so plenty of firepower for the Rite, but the choice of the 1947 revision of Petrushka, for small orchestra, was baffling. Though beautifully precise and meticulously directed, these unwieldy forces made it feel at times like listening to music-by-numbers. Only towards the close, when great, striding string chords cut through with the force of a knife, did the sheer size of the ensemble make sense. 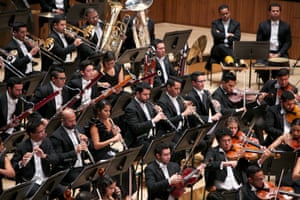 Facebook Twitter Pinterest Ferocious, juddering string chords are, of course, the instantly recognisable motif in The Rite of Spring, and here the orchestra’s overwhelming sonic power was always going to be a winner. Dudamel, conducting without a score, stood like a cool traffic cop in the middle of this glorious mayhem, assailed on all sides by juggernauts of sound, with great work from the woodwind and brass as the pagan Dance of the Earth took its mesmeric hold.