"The economy here is so bad," says Mylora Tuttle, the mayor of Depew, a community outside Tulsa, Okla. The town gave up its two police officers more than a year ago because of money. "It's just, we have no possibility for generating income."

In Oklahoma, two-thirds of all law enforcement agencies have five or fewer officers. At least 10 police departments in the state have closed in the past year. 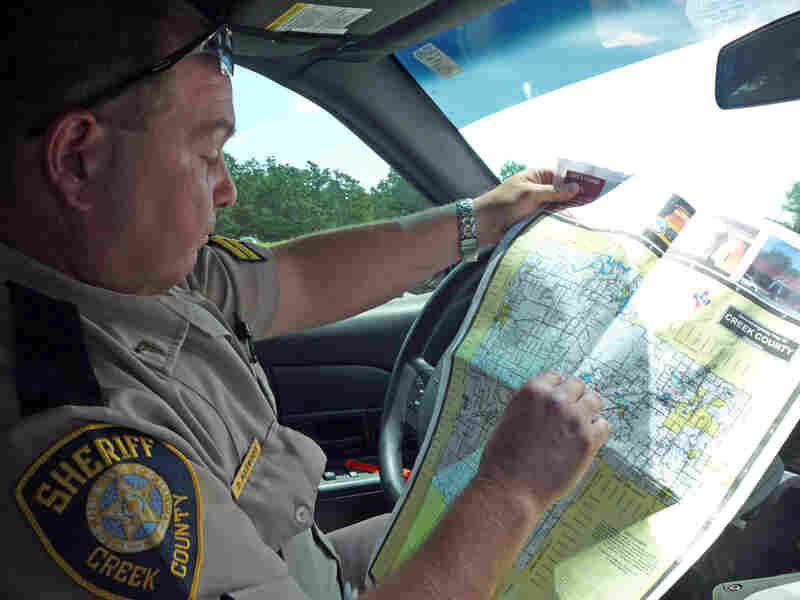 Creek County in Oklahoma is so big, responding to a call can sometimes take a bit of research for Cpl. Allen Harwood.

Now the policing of Depew falls to the Creek County Sheriff's Department. It's a big county -- about 950 square miles -- but its population is small, just 70,000. Cpl. Allen Harwood patrols its open roads. Stray dogs, domestic disturbances, even the occasional murder -- they're all part of the cases he handles. He's one of only a handful of deputies on duty at a time, and even in emergency situations, it can take a half-hour to respond to a call. Though his department is newly responsible for Depew's safety, Harwood says no extra deputies have been added.

"We try to patrol the area more; the problem is we're short-handed ourselves," he says. "When they don't have a police department, it adds more to our patrol."

So in Depew, many city ordinances are no longer enforced. Vandalism is on the rise, and the town's only bank closed in June because of a lack of security. Some residents like Fred Jackson worry that Depew is about to become a ghost town.

"You see young kids running around at night with no curfew to adhere to," Jackson says. "When you see them out running around after dark like that, you wonder what they're up to, and it makes you kind of wish you had a policeman on duty."

"I was driving past City Hall one time, and they were standing out in the parking lot dealing right there," he says.

The International Association of Chiefs of Police says what's happening in small communities is worrisome. The association's John Firman says the fabric of American policing was built on small, rural agencies, but now that's changing.

"Right now in America, police are losing officers at a rate that dips them below the threshold of being able to keep their citizens and their officers safe," Firman says.

In Pennsylvania, the state police have taken over 14 city departments in the past year. In Washington state, the problem is worse. Some cities can't afford to pay county sheriffs for patrols. Don Pierce, with the Washington Association of Sheriffs and Police Chiefs, says even though rural residents have learned to fend for themselves, people in more populated communities now have to do the same.

"I'm very concerned about how that's going to work out," Pierce says. "I expect that there will be some horror stories before too long."