She, naturally, is having none of it. Nor is she letting them get away with calling her Irish, still less a romantic Catholic nationalist. She’s a UK citizen and proud of it. But in David Ireland’s heady black comedy, a satire as timely as it is riotous, they’re going to keep misdefining her until things get bloody. If Jacobean revenge tragedies were played as uproarious comedy, they’d look like this.

...com/stage/theatreblog/2016/apr/11/cyprus-avenue-david-ireland-belfast-play-royal-court-theatre-upstairs">David Ireland The way Ireland sees it, male attitudes to women are akin to the rest of the UK’s attitude to Northern Ireland. They listen but don’t hear, brutalise but plead innocence, call for conversation but merely mansplain. The more Ruth (played by Lucianne McEvoy) protests, the more they shut her down. 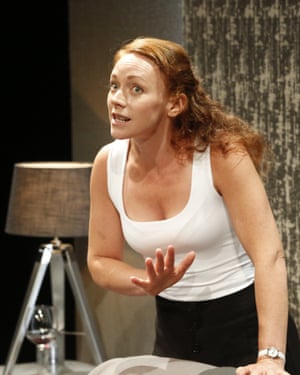 Facebook Twitter Pinterest But in a very 21st-century touch, Ireland gives her all the weapons. He knows that in the era of online scandal a mobile phone primed with an unsent tweet is as unsettling as a loaded stage gun. She has information of Weinstein-level import and is ready to press send.

Weinstein The stakes, in other words, are ratcheting up, and, the higher they go, the more the men reveal their true colours, sometimes hilariously, sometimes painfully. It’s rare to hear an audience repeatedly gasp out loud at the wince-inducing action on stage. Like Jerry Sadowitz, Ireland can make you laugh and doubt the wisdom of your laughter at the same time.

Jerry Sadowitz As befits the divided times of Brexit Britain, all three characters have turned up in theatre director Leigh Carver’s flat (realised in tasteful shades of grey by designer Becky Minto) under a misapprehension. Leigh (Robert Jack) thinks he’s working on a play that gives voice to the post-referendum anxiety of a nation about to leave Europe. American box-office star Jay Conway (Darrell D’Silva) is convinced his lead role will connect him to his Irish roots. For her part, Ruth arrives with the star-struck ambition of a woman who thinks she’s en route to Hollywood. None of them is right, and it’s their recognition of this that fuels the comedy and the satirical sting.

In Gareth Nicholls’ immaculately paced production, all three are superbly realised. Loud and needy, Jay deploys his self-help philosophy like a weapon and shares his liberal values like a threat. Squirming and fidgety, Leigh is all innocent double takes and accommodating smiles until circumstances force him to reveal his petulant core. Ruth, meanwhile, has the quiet determination of a strategist whose territory is coming under sustained attack – she’s patient and polite until she isn’t.

In these characters’ assumptions, confusion and rage, Ireland brilliantly captures the bewilderment of a generation that knows the rules of social engagement have changed – whether on gender relations, national identity or global politics – but is hopelessly and hilariously inadequate when it comes to putting the new-found knowledge into practice.

At the Traverse, Edinburgh, until 26 August.


the Traverse, Edinburgh Read all our Edinburgh festival reviews