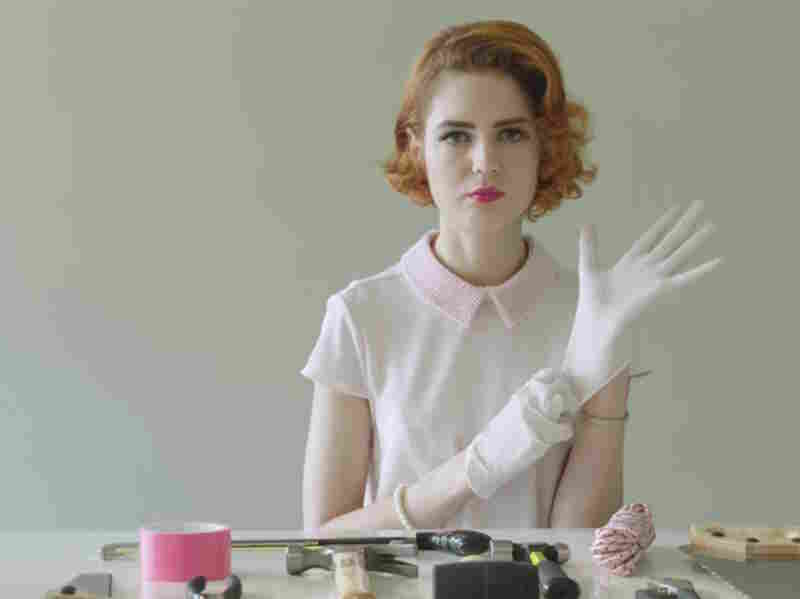 Enlarge this image Worry not, if you have yet to see Get Out — the blockbuster social thriller by Jordan Peele that decons...ructs America's racist monstrosity in horrific detail — Daye Jack's new video for the single "Lady Villain" contains no spoilers, despite their strikingly parallel themes.

that deconstructs Jack, a metro Atlanta-raised rapper whose major-label album No Data dropped last week on Warner Bros., wrote "Lady Villain" nearly two years ago. It finds him exploring the woes and whoas of modern love from a young cynic's perspective, with his romantic interest cast as, well, the heartless villain: "I think you're just a evil villain baby," he raps. "All them tricks you're playing, fallin' I'm fallin' for ya."

But it's their interracial dalliance — and his lover's cold, clinical approach to cutting it off — that bears a striking resemblance to Get Out's own lady villain. (They even seem to share a penchant for pasteurized milk.) Directed by David Gallardo, the lens behind several Daye Jack videos, "Lady Villain" was filmed and edited well before Get Out's late-February nationwide release. Yet the coincidence is remarkable.

"I think it's a good coincidence," Daye Jack tells NPR via email. "Even though they aren't connected, after watching Get Out I felt like I learned more about my own song and life experience. Relationships are scary, interracial relationships are even scarier. It's on you to decide whether it's possible to break the barriers of two different cultures."

Unlike Get Out, Daye Jack's (former) lover skips the microaggressions and goes straight for the jugular. When the distressed star finally makes his appearance near the video's conclusion, he's hogtied in the bathtub with a pink rope.

"The video was inspired by thinking about the extremes of love — when passion turns toxic," Jack says. "Most of my album, No Data, acts as a guidebook to my young, confused teen self. And I play the role of the wise big brother who's lived through s***. The video is a little warning for the young me."

As for the uncanny plot parallels with Jordan Peele's film, Jack says he was "actually really surprised, not only by how similar the messaging was between the two, but also by how much I related to the main character [of Get Out, played by Daniel Kaluuya] — from the relationship, to half-heartedly trying to quit smoking, to having that one friend who's scared of white people."

Still, this is far from Daye Jack's thesis on race relations. In his eyes, the horrors of love know no color. "Every relationship I've been in has been scary," he says. "I want [the song] to be taken as relationships in general, in the broadest way. There are two sides to any two people with a strong bond. There's a side of love and respect, but there's also a side of pent-up hate and disdain. We don't talk about the full picture, which I think is unhealthy. The worst is that moment when you both know it's not working out, but you stay together in limbo [while] both talking to other people and planning an exit strategy."