Download festival review – fire, fury and hymns to the dark side

Rock’s old guard are out in force, too. David Coverdale is still lascivious charm personified as Whitesnake thunder through the hits and a couple of sparky new songs. “The sun’s out!” bellows the Cov, beaming from ear to ear and looking like some fabulously wealthy LA grandma. Much less diverting is Slash, whose solo material is phenomenally dull. A perfunctory canter through Guns N’ Roses’ ...w.youtube.com/watch?v=VMDljoM5JFI">Nightrain aside, it’s a struggle to pick out a memorable tune or genuinely dynamic moment. Fortunately, there’s no disputing Def Leppard’s headlining prowess. Playing the all-conquering Hysteria in its entirety, they sound immaculate and vastly more engaged and spirited than they did last time they topped the bill here in 2011. Let’s Get Rocked is still horrid, however.

David Coverdale Slash Nightrain Def Leppard Hysteria Let’s Get Rocked Saturday is a feast of bombast and exuberance. Everyone’s throwing the kitchen sink at it, from satanic extremists Behemoth’s wildly subversive conquering of the main stage to Skindred’s remorselessly uplifting ragga-metal riot. Quite how South African hip-hop group Die Antwoord fit into all of this is anyone’s guess – and they look pretty confused about it themselves – but the pounding EDM insanity draws an enormous crowd and everyone seems to know the words to Fatty Boom Boom and I Fink U Freeky. 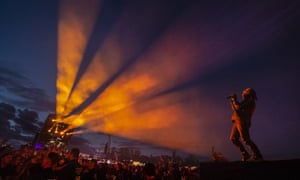 Facebook Twitter Pinterest In truth, the whole day is really just one big buildup towards Slipknot’s set. It’s the fourth time the Iowans have headlined at Download, but they’ve never sounded more pissed-off or antisocial. New songs All Out Life and Unsainted are greeted like classics and the size of the crowd alone confirms that they are anointed kings of the Donington turf.